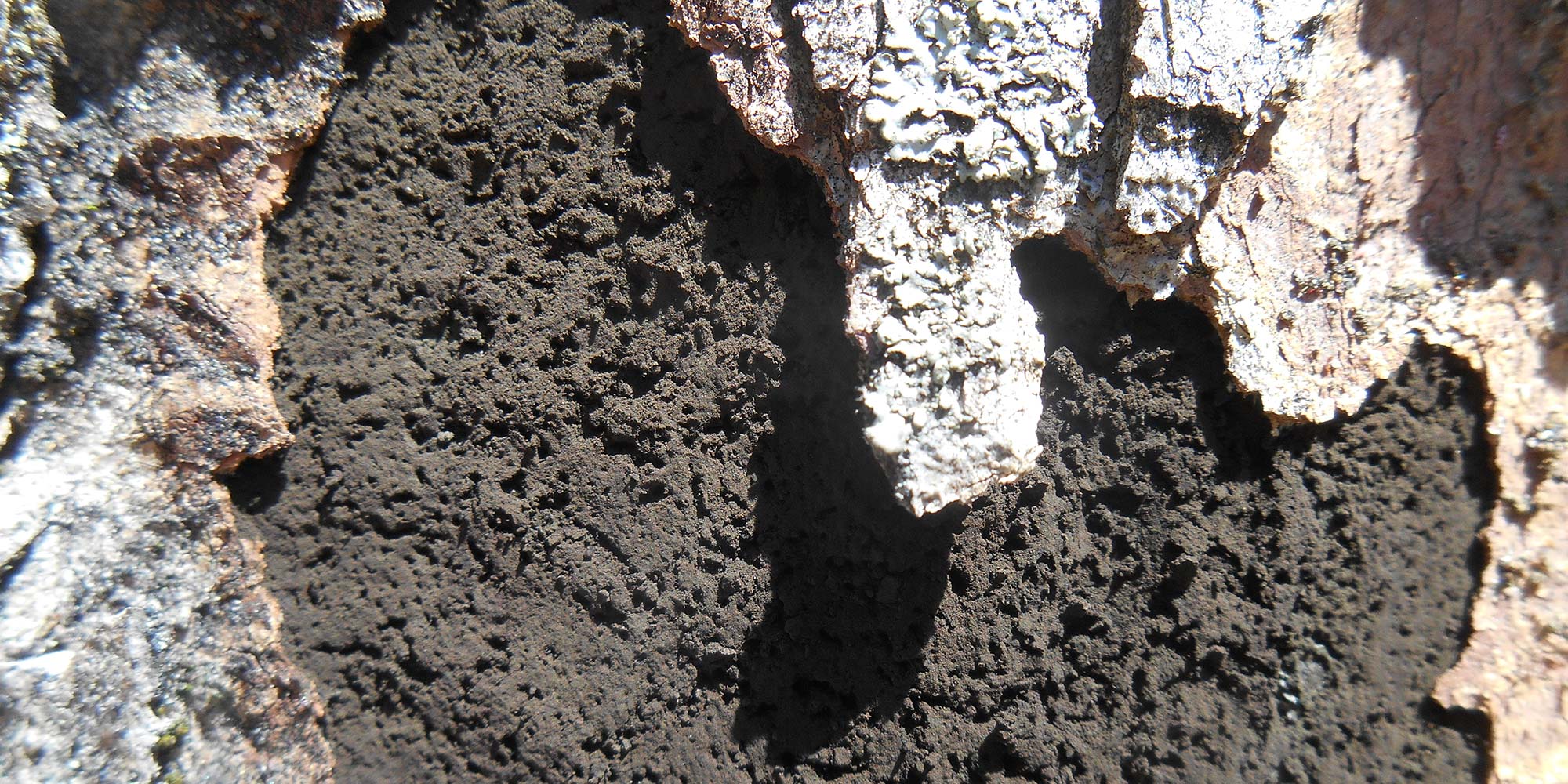 This disease occurs in Europe. The pathogen was apparently introduced from the Great Lakes region of North America, where it does not cause disease, to the UK shortly before 1945, when it was first noticed there. However, it has recently been found causing disease in Seattle, Washington, USA (see Distribution and Damage below).

Known as Rußrindenkrankheit in German, it should not be confused with sooty-bark canker of aspen. It’s interesting that these diseases have similar names, because it is for entirely different reasons. The ‘soot’ in the aspen disease is decomposed inner bark that fragments to dust. That of the maple disease refers to the incredible masses of airborne conidia released when the outer bark falls away. The conidia are a risk to forest workers around the dead and diseased trees, requiring mitigation.

The most prominent host is Acer pseudoplatanus, but there are additional maple species sometimes infected. All are European natives except A. negundo from North America.

Cryptostroma corticale is the pathogen (this nice-sounding name means roughly “hidden stroma in the bark”). It was originally described in London, Ontario in 1898.

It does indeed produce stromata in the bark ​[11, 12]​.  The stroma splits parallel to the bark surface to form a roof and a floor.  These are pushed apart by columns up to 1 mm long, making room for fruiting.  The stromatal tissues blacken as they mature.  From the floor, a blue-gray layer of conidiophores develops, producing conidia in chains. Shedding of the bark and outer stroma reveals the brown-black mass of conidia, as well as the persistent black columns (see featured image above, courtesy of Dr. Thomas Kirisits, IFFF-BOKU, Vienna).  When the spores are dispersed, the conidiophores are blue-gray over the black stroma.  Sexual fruiting is not known.

The stroma pushing up the bark is a little bit like Entoleuca mammata, which produces little pillars that push out the outer bark in salt-and-pepper canker. Also in oak wilt, the fungus produces “pressure pads” to crack the bark open, allowing insects to visit the inviting mycelial mat. And in butternut canker, the pathogen produces mycelial pegs that lift and rupture the outer bark where it is thin.

Using molecular phylogeny, the pathogen was found to belong in the genus Biscogniauxia (Xylariales: Graphostromataceae) ​[10]​. However, to date the name Biscogniauxia corticalis has not been formally published.

Increase in disease frequency following hot and dry summers has been widely observed. Some would even say that disease occurs only with such conditions ​[14]​. Soon after its introduction to Britain, the disease was most severe following hot summers of 1947, 1948, and 1955 ​[12]​.  This suggests that host stress from such conditions increases susceptibility. However, the fungus grows in culture and in the host much faster at 25 C than at 10 C ​[12]​, so the pathogen is also favored directly by warm conditions.

Although it had been suggested that a threshold for disease outbreaks was at least one month of the summer (June/July/August) reaching a monthly average of daily maximum temperature of 23 C, Cech ​[3]​ noted that many places in Europe reach that threshold most of the time. He and others determined that the 23 C threshold applies better to the mean monthly temperature. For example, an outbreak in Gänserndorf (see Distribution and Damage below) followed 2015, when July and August exceeded that threshold.

The infection court is not known with certainty, but it appears that Cryptostroma corticale infects young shoots and branches, which may result in a largely inconspicuous twig or branch dieback ​[3]​. At the same time, however, the mycelium grows through the wood and into the heartwood without any further external symptom. Internally, there is a light green to brown stain that indicates where the fungus has grown. Colonization is mainly longitudinal, and the rate of growth is increased by heat and drought stress ​[3]​.

In hot summer weather, radial growth increases ​[3]​. When the fungus reaches the outside of the wood, it kills the cambium, invades the bark, and begins to develop the stroma, with its tremendous numbers of spores, as described above under Pathogen. The bark falls off, aided by pressure from the mycelial columns, and spores can be released.

It appears that, aside from some initial twig or branch killing after infection, the fungus can become latent in the tree. If temperatures are cool and the host is not stressed, there may be longitudinal growth but little radial growth, so external symptoms do not develop. Thus, a tree may be colonized from the roots to the twigs, so that when stress and heat trigger radial growth, it is rapid and devastating, with spore masses developing up and down the stem and branches.

This widespread latent infection suggests that the distribution of the pathogen and the frequency of infected trees may be much greater than indicated by disease ​[3]​.

Cryptostroma corticale was described in 1898 from London, Ontario, Canada. It is common in the Great Lakes region of North America, mostly on maples, but is considered a saprobe and does not cause tree disease ​[9]​ (but does it infect trees asymptomatically, as an endophyte?). It has been known since 1932 that it can be dangerous to humans, however ​[3]​ (see below).

Elsewhere in North America, it was collected near Poncha Springs, Colorado in 1898 on Populus angustifolia (narrow-leaf cottonwood) ​[6]​, but there is no indication it was associated with disease. Similarly, it was collected in 1969 in eastern Washington on a young standing dead Acer pseudoplatanus (sycamore maple) ​[7]​.

The fungus was apparently introduced to Europe from North America. it was first noticed in 1945 in northeast London ​[12]​.  It spread quickly, causing a devastating wilt and mortality of sycamore maple.  It has been suggested that it came to Great Britain in timber imported into London docks. The large-scale shipment of men and materiel from North America to England during World War II may be a likely route and time.

Sooty-bark disease of maple is now well established in the UK, France, Germany, and Austria ​[3, 12, 14]​ and was found more recently in Switzerland, the Netherlands, Bulgaria, and the Czech Republic ​[2–4]​.

In Austria, the disease was initially scattered and never affected more than 5% of the potential hosts ​[3]​. However, in 2018 the disease was found in the Gänserndorf area, northeast of Vienna near the Slovakian border, with an estimated 60% of the sycamore maple trees infected.

In early 2020, a damaging disease was observed in A. pseudoplatanus trees in one location in Seattle, Washington. As the symptoms and signs appeared to fit sooty-bark disease, samples were sent to Bartlett Tree Research Laboratories. There, DNA sequencing confirmed the presence of Cryptostroma corticale (personal communication, Chris Rippey, Seattle Parks and Recreation; and Megan McConnell, Bartlett Tree Research Laboratories). This is the first report of the disease in North America.

Later in 2020, the disease was found at three additional sites in Seattle, and two samples were sequenced, confirming the pathogen again (personal communication, Chris Rippey and Megan McConnell). These new sites included two new hosts: Acer rubrum (red maple, native to eastern and central North America) and Acer macrophyllum (bigleaf maple, native to northwestern North America). Acer rubrum grows naturally in the native distribution of C. corticale, but the disease has not been reported there. The fact that the disease appears to be spreading and infecting native Acer spp. raises concern.

If we weren’t transporting fungi all over the world, this never would have happened. Now, prevention can only be accomplished by reducing the amount of the host. In dry-warm sites of Austria outside of the Alps, A. pseudoplatanus should be incorporated into new stands only as a mixture and in limited numbers ​[3]​. Similarly, in southern Britain, where temperatures often favor the disease, it is recommended to reduce the proportion of A. pseudoplatanus where it is used at all ​[14]​.

However, Phillips & Burdekin suggested that, in Britain, the temperature requirements for disease would restrict it to the south, and greater London in particular ​[12]​. They felt that suitable conditions would be infrequent and that, “Unless there is a dramatic change in the summer temperatures in Britain active measures to control the disease would therefore seem to be unnecessary.”

The spores are hyper-allergenic; they can cause severe asthma ​[15]​ and hypersensitivity pneumonitis ​[5]​. Maple bark disease, or maple bark stripper’s disease, is an uncommon condition caused by exposure to the spores of C. corticale. The disease has been found among workers in the paper industry employed to debark, cut and chip maple logs. The symptoms include breathlessness, fever, night sweats, chills and weight loss ​[13]​. In North America, it has only been an issue when logs have been stored for at least 6 months ​[9]​, but where it is a pathogen, large numbers of spores can be released even before the tree dies, and removing or harvesting dead standing trees can endanger workers.

Forest workers must wear personal protective equipment when working around dead and diseased maples ​[1]​. It is recommended to keep the public away while working on trees, and preferably to use machine felling rather than chainsaws. It is also advised to work during wet weather to reduce the number of airborne spores. Wood should not be used for firewood. It should be covered during transport and burned. Personal protective equipment includes:

With higher summer temperatures, more frequent extremes, and increased frequency of drought, it is clear this disease will become more severe, and the disease distribution will increase. But there is an additional point of pain with this disease. In Europe, maple species, especially Acer pseudoplatanus, have been regarded as the reservoir of hope for deciduous forests in the face of climate change ​[3]​. This species was considered a likely substitute for the species more obviously endangered by climate change. Now it appears that these hopes are dashed.

If you have looked at much of this web site, you will think I’m a broken record. Well, this tragedy is repeated around the world, hundreds of times, often with devastating consequences. We’ve got to stop moving wood and plant materials around the world without regard for creating new tragedies.

Is this really a canker, as I have placed it, or a wilt disease? Well, it attacks and kills cambium and bark, so by definition it is a canker. Growth in and stain of wood is unusual for cankers, but it is similar to Cryptosphaeria (snake) canker of aspen in this respect. The stain pattern is not typical for wilts. So for now, we’ll consider it a canker.

Thomas Kirisits (IFFF-BOKU, Vienna) kindly provided the main references on this disease. I also thank him and Thomas Cech (Dept. of Forest Protection, Federal Forest Research Center, Vienna) for providing the photos and permission to use them.