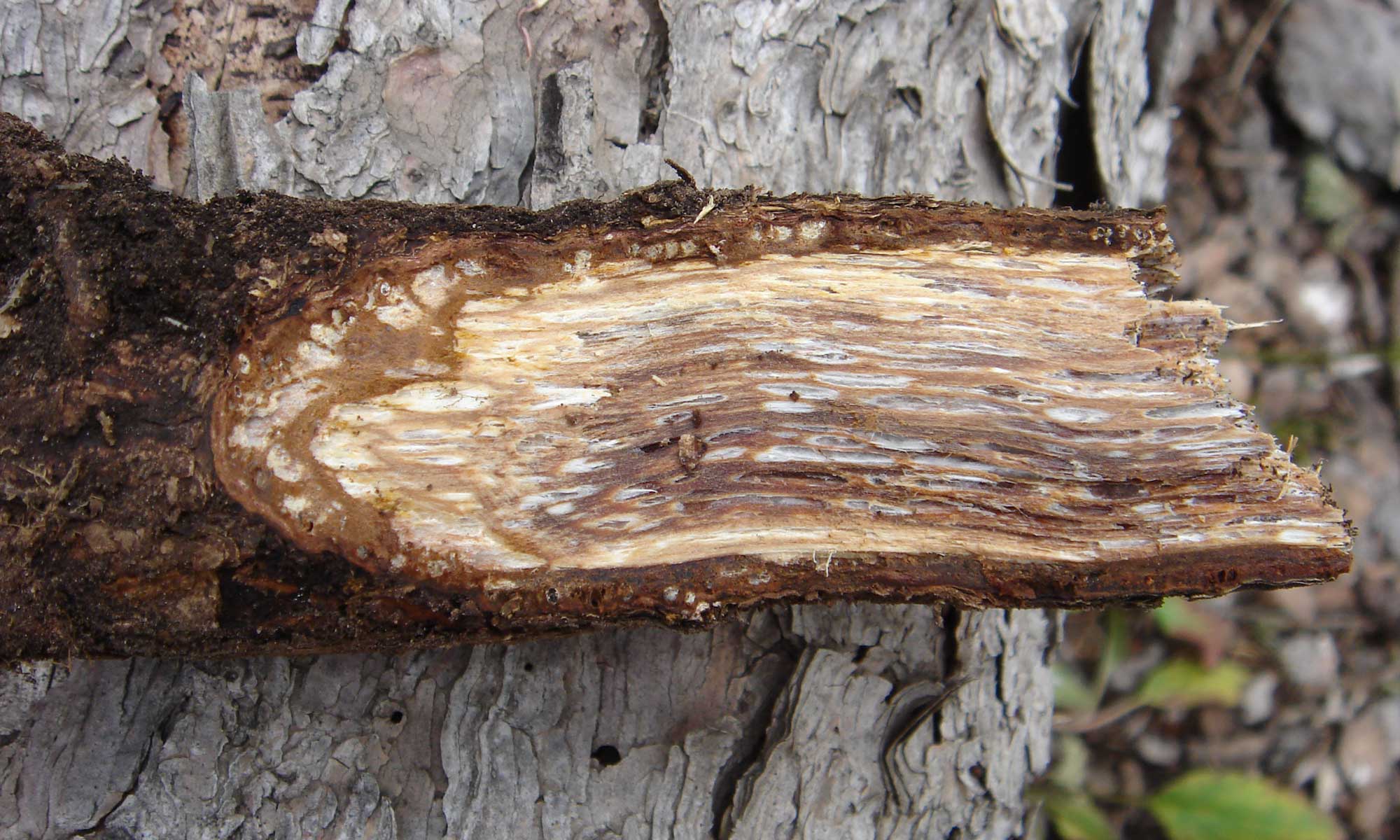 This disease is common in many temperate conifer forests of the northern hemisphere, but not always damaging. Here we include diseases caused by several widespread Onnia species, as they appear to be similar.

See the carousel below, just above the management section, for lots of cool pictures of the disease and pathogen.

Among the three best known pathogen species, two occur primarily on Picea spp. and the other on Pinus spp. Whitney lists 21 tree species infected in Canada (for at least two pathogen species) ​[21]​. See the table below for some other hosts. In North America, the exotic species Picea abies (Norway spruce) and Pinus sylvestris (Scots pine) are considerably more resistant than native species in those genera ​[21]​. Hardwoods are immune.

Three species of Onnia causing red root rot are somewhat well known (see table below). In the recent past they were considered in the genus Inonotus. In North America, two species were recognized for a long time, I. tomentosus and I. circinatus, and the resulting diseases were often called tomentosus and circinatus root rot, respectively.

Now we know that what we have called O. circinata is really two species, and neither is O. circinata. How does that work, you ask? European mycologists have carefully studied the writings of Fries, who authored these names, and concluded that O. circinata is really a later synonym of O. tomentosa ​[3, 11]​. In other words, the name shouldn’t be used anymore. The second error, piled on top of that one, is that what people have been calling O. circinata is two different species, O. leporina and O. triqueter. I recommend the entertaining telling of the complex story by Jahn (in German) ​[11]​. In North America, almost all publications to this day do not distinguish the two species long considered O. circinata.

Gilbertson & Ryvarden used the older tomentosus/circinatus arrangement in their 1986 opus, North American Polypores ​[7]​. For those reluctant to part from that authority, note that the pair changed their minds by the time they published European Polypores in 1993 ​[16]​, and instead followed Černý and Jahn ​[3, 11]​.

The basidiomata are annual, brown, up to 11 cm or so in diameter, and centrally to laterally stipitate or sessile. They may arise from the soil, where they are connected to buried roots, or appear directly on the base of a tree or stump. The pileus and stipe surfaces are velvety-fuzzy. The lower, pore surface is pale brown but darkens with age. The context is distinctly duplex, with a firm, corky layer next to the tubes and a spongy upper layer. Like many members of the Hymenochaetaceae, they are brown, the hyphae are simple-septate, and the hymenium bears setae along with basidia.

The species are similar macroscopically, but there are differences. Onnia tomentosa typically fruits, sometimes abundantly, from buried roots. The connection to buried roots through the soil can be narrow and fragile, so a novice may not recognize that it decays wood and is a pathogen. In contrast, conks of O. leporina and O. triqueter usually occur on the base of the host tree or on a stump, with the stipe being absent or rudimentary (substipitate) and lateral. Microscopically, they differ in having straight (O. tomentosa) vs. hooked (O. leporina and O. triqueter) setae.

If you’ve been paying attention so far, you might be thinking that O. leporina and O. triqueter sound the same. So: Onnia leporina is usually sessile (with a pileus and no stipe) and there are generally numerous overlapping (imbricate) conks. It is fairly thin, applanate (projecting more or less horizontally), and brittle when dry. Cultures have abundant setal hyphae. It is most commonly found on Picea spp.

In contrast, O. triqueter is usually laterally substipitate, with more or less solitary conks, and is thicker, but the tubes are shorter. The shape in profile is triangular because the pore surface slopes down steeply to the base. It is tough when dry. Cultures lack setal hyphae. Most importantly, it occurs (almost?) exclusively on Pinus spp. This is likely the species that infects pines in southeastern North America ​[1]​.

Onnia tomentosa is the most common and widespread species. In the USA and Canada it occurs almost throughout the range of Picea spp. ​[7]​. In the southern Rocky Mountains, fruiting is uncommon but may be amazingly abundant in certain years. It is by far most common on Picea spp., but in North America it has been collected on Abies, Larix, Pinus, Pseudotsuga, Thuja, and Tsuga.

There are more than a dozen species of Onnia now, but most are not well known. The following summarizes the features of the three most important and widespread species ​[3, 11]​.

At least in Ontario, Canada, managed forests, especially plantations, have much more disease than natural, unmanaged forests ​[21]​. One reason for this is that managed stands tend to be pure, enabling the fungus to spread unchecked. Natural stands are more often mixed with less susceptible and immune species, which can prevent progress of the pathogen where they occur ​[20]​.

However, in Sweden, Onnia leporina is much more common in old-growth forests than in managed ones ​[5]​. In Finland also, O. leporina was the second most important mortality agent in pristine Picea abies forests, after Coniophora sp. ​[12]​. And it may have been underestimated in that study, as the attribution required presence of fruiting, while that of Coniophora required only brown rot.

In many areas, red root rot occurs together with Armillaria root disease, often on the same trees. It is likely in most cases that red root rot was first, and as trees weaken they are colonized and further damaged by Armillaria species. See images in the carousel below.

Where climate change brings warmer and drier conditions, it is expected to increase red root rot ​[2]​.

There are multiple lines of evidence that primary infection by basidiospores can and does happen. Basidiospores of O. tomentosa inoculated into wounded roots of Picea glauca caused infections, and germination of basidiospores was stimulated by exudates from root bark and wood but inhibited by soil organic matter ​[18]​. Sounds like a spore that evolved to germinate when it gets to a root surface, especially a wounded one, right? Somatic incompatibility, protein, and DNA studies indicated that generally, within a center the fungus is a single genet, but between centers they were different ​[6, 14]​, suggesting that the centers resulted ultimately from different basidiospores. Further, Whitney found infections in plantations on sites that had been in agriculture for 40-60 years, with no stumps or old tree roots ​[20]​. Basidiospore infection is the only reasonable explanation for this.

Sometime after basidiospores germinate, the resulting mycelium must fuse (mate) with a compatible mycelium to get the complementary nuclei necessary for sexual reproduction (fruiting). It is not known if this must also occur before infection and/or colonization of a live host, but that has been suggested for other wood-decay pathogens.

More infections probably occur by secondary infection, mycelial growth across root contacts, than by basidiospores. Onnia tomentosa can survive 20-30 years or more in dead roots and stumps ​[13, 17, 18]​, but it can’t grow out more than a centimeter or two to find new hosts ​[19]​. Instead it plays a waiting game – nothing is more patient than a fungus. When a root of a healthy host tree comes into contact with the dead root, it is infected.

In an established stand where host roots intermingle, no patience is necessary. As soon as the fungus colonizes the roots of one tree, it finds the contacts and grows into the next tree, leading to expanding disease centers ​[15, 18]​.

Growth in infected roots and disease development are relatively slow. In inoculated roots in Ontario, O. tomentosa initially grew an average of 4 cm yr-1 ​[18]​, but about 12 cm yr-1 later ​[10]​. Spread rate through a spruce stands in British Columbia was estimated at a maximum of 10 cm yr-1 ​[13]​ and 20 cm yr-1 ​[10]​. Annual volume loss due to the disease is lower than other root diseases ​[4]​, indicating slow disease development.

Like many root and butt rots, the first thing that usually draws attention in a damaged stand is a mortality center with dead standing and downed dominant and codominant trees. Often there is evidence of expansion over time, with older failures near the center and recent ones toward the edge. There may be evidence that trees were alive when they fell, and typical decay (see below) in broken surfaces. In ecological terms, these disease centers are canopy gaps.

Like most root diseases, red root rot has no diagnostic external symptoms in standing trees. There may be reduced growth (evidenced by shorter internodes and narrower growth rings), chlorosis (yellowing of foliage), branch dieback, and a stress crop of crones. More specific to biotic root diseases killing sapwood and cambium, there may also be basal resinosis evident on the root surfaces, with resin often soaking the soil by the root.

Inside the base of the tree and especially the roots, however, we begin to narrow the potential causes. The early stage is a red-brown stain in the inner wood of roots. Later, we see a white pocket rot (see featured image above, decay in a root of Picea engelmannii caused by O. tomentosa). The pockets are often not so distinct, but the red-brown stain persists between them. Roots often have pale yellow to brown ectotrophic mycelium on the surface under the soil. That sign is diagnostic if correctly identified. And of course, if you find fruiting, there remains no doubt.

Red root rot is a damaging disease of spruces and other hosts in some areas, causing large, expanding mortality centers, especially in eastern Canada. In the southern Rocky Mountains of Wyoming and Colorado, the disease is common in spruce (as shown by abundant, widespread fruiting in good fruiting years). It is a significant cause of root and butt rot in both spruce and fir ​[8, 9]​, but disease centers are rarely apparent.

Damage occurs directly through mortality (either standing or through mechanical failure), growth loss, and decay of wood in the butt, the most valuable part of a tree. In developed sites, such as campgrounds, mechanical failure of green trees can pose a significant hazard. However, in undeveloped stands where wood production is not a management goal, these kinds of damage may not be considered negatively if they are not extreme. The disease centers may foster age and species diversity and promote growth of forage for wildlife. Premature mortality provides a continuous supply of snags for fungi, insects and birds, and butt rot can provide denning opportunities for wildlife.

Whitney ​[21]​ points out several features of the disease that can facilitate management:

The slow growth of the pathogen, the frequent lack of substantial damage until the disease is advanced (no toxins), and the patchy occurrence means that, in many cases, infested stands can be managed on short rotations and successfully produce low-value products such as pulpwood. Even though many trees may be infected at an early harvest, volume losses will usually be low. Areas of the stand that remain disease-free can be managed on a longer rotation for high-value products such as sawlogs and veneer ​[21]​.

Taking advantage of item 2, it was found that thinning can reduce spread by preventing or delaying root contacts between living trees ​[20, 21]​. Once the cut trees die, it is unlikely their root systems can be colonized by the pathogen.